After this update we are going to work on several updates of our games so we are going to leave this project paused for one or two months. But dont worry its not going to be abandoned, for sure I will come back to it, its going to be the main 2021 Questtracers release ! 🙂

In the following post im going to explain how is the actual (and probably final) version of the tileset json file.

The first part is very simple, its some general settings:

The first section is the removeTiles, this section will contain the coordinates of the tiles that will be removed from the tile palettes. In the reference program tilesets there are several tiles that are not used anyway and dont appear in the tileset palette so I decided to include this.

Every single tile in the tileset will have assigned an animation group, the default one is the one that only contains a 0. The array of the animation groups tells the program how many spaces he needs to jump in the tile to show the following frame of a tile animation

The group squared are the simple clever tiles (and most used)

Groups line tiles are a new kind of clever tiles

Sorry for the long post but probably this post will be part of the documentation in the future. I also will update this post with more detailed info if needed about how the json works and other changes the json will have.

The other great feature is that you can create groups for clever tiles, this means that two clever tiles can act as a single clever tile when they are close or not.

Here you can see the first steps of our tile editor, for the moment for the official posts we will use the EasyRPG RTP for testing purposes till we have a proper one

As you can see the tile editor supports clever tiling without the user needs to worry about tiling one by one the different tiles so they are coherent. The user will be able to set this clever tiles via Json being this one of the main advantages compared to other RAD Maker tools.

You can check how the Json looks here 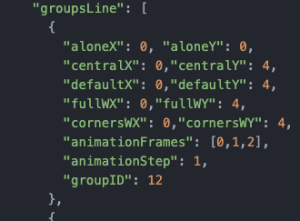 Dont worry if you dont understand anything, the program will have a tool to generate this jsons in a visual way. That would be a topic for another post.

We also had some support for animated tiles but due to some refactors to make the tile rendering more efficient we have removed it temporally. I will make another post when I have the animated tiles working.

The tool is being developed in Purebasic a very nice program creation tool and the games will run under the Löve2D lua engine.

Why Purebasic?
Mainly because it allow me to focus on which is the most important the creation itself of the program and not dealing with any crazy javascript frameworks and libraries everytime i want to do something different.

Why Löve2D?
Love2D is a really well stablished 2D game engine that runs using LUA script code, it has a zlib license what allow me to use it for commercial projects. It also has bindings to JS so the games will run in browsers, and it has runners for every platform and tutorials on how to pack them into mobile apps.

Here is a first screenshot of the first layout of the program, that for sure will change a lot during its development 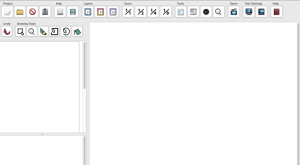